Lung cancer is the number one cause of cancer-related deaths in the United States and worldwide (1). Furthermore, lung cancer has amongst the highest public burden of cost worldwide. Healthcare cost to Medicare beneficiaries were analyzed (2): the highest costs were related to surgery and an estimated $30,000 over a 15-year period. Similarly, patients receiving chemotherapy and radiation therapy faced a cost of $4,000–$8,000 per month, with an average life expectancy of 14 months from the time of diagnosis (2). Europe’s incidence of lung cancer is estimated to be 60 per 100,000 inhabitants. Its costs of healthcare and management for the patient post-intervention are estimated to be 17,000 Euros per year (3).

The National Lung Screening Trial (NLST) found that examination with low-dose computed tomography (LDCT) instead of the standard chest X-ray, in a high-risk population, led to a 20% reduction in mortality rate (4). Additionally, the detection rate of lung cancer screening with low-dose CT is 2.6- to 10-fold higher than that with chest radiography (5). The key to reducing lung-cancer related deaths is early diagnosis and this relies on fast and accurate detection of lung nodules and careful examination of chest CT scans to determine malignancy: a process which requires considerable time and effort on behalf of radiologists and physicians.

According to a recent study, physicians spend 75% of each patient visit on activities other than face-to-face patient encounter (6), including working with the EMR. Studies also found that physicians from various specialties spend up to 2 hours on administrative duties for each hour that they see patients in the office, followed by an additional 1 to 2 hours of work after clinic, mostly devoted to the EMR (7). It is likely, although not investigated, that these figures are much higher for physicians screening patients at risk for lung-cancer, due to the time required for the initial examination and evaluation of CT scans.

During the 18th World Conference on Lung Cancer (WCLC), Dr. Flanou confirmed that oncologists were at highest risk from burn-out compared to other physicians as well as other oncology care staff (nurses, psychologists and social workers), with a reported prevalence between 35–60%. Amongst individuals who suffer burn-out there is a risk of mental health issues in 20–35%, moreover in physicians it is associated with a decrease in empathy towards patients and reduced quality of care (8). It is therefore of utmost importance that all ways in which the burden of work on physicians may be reduced, should be explored, for the wellbeing of both the patients and physicians.

One such solution is AI automated CT lung cancer detection, which can be used to assist physicians: thereby reducing their burden of work; optimizing hospital operational workflow; and providing more time to develop a high-quality doctor-patient relationship. A computer-aided detection (CAD) system was first introduced by Niki et al. [2001] as a means to extract and analyze data from CT scans, classify benign and malignant lung cancer changes, and for the purpose of screening patients using 3D CT scans (9). Since then, numerous studies have found improved detection of lung nodules on CT scans when examination by a physician/radiologist is combined with the use of a CAD system (5,10). Improved radiologist performance with CAD was noted especially in the detection of small lung nodules, <5 mm in size, which are often easily overlooked by visual inspection alone (11). Thus, CAD and its associated AI models help not only to reduce the burden of work on physicians, and subsequently fatigue-related errors of judgement, but to improve detection of nodules particularly in the early stages of lung cancer, which are more likely to be missed.

We present the following article in accordance with the MDAR reporting checklist (available at http://dx.doi.org/10.21037/jmai-20-24).

Description of the research experiment (12)

In this experiment, a hybrid model was proposed: for this specific task, LeNet, AlexNet, and VGG-16 were used. In addition, the features obtained from the last fully-connected layer of CNNs were applied as input for the following machine learning/classification models: linear regression (LR), linear discriminate analysis (LDA), decision tree (DT), support vector machine (SVM), k-nearest neighbor (kNN) and softmax. All the machine learning classifiers were tested at the end and examined separately by comparing their performance (12). In order to increase the classification accuracy, image augmentation techniques were used during the training of the models (12). In this scope, approximately 20 additional images were obtained from each original sample in the dataset. Lastly, the mRMR feature selection method was used to find the most efficient features, which were then applied as the input in the above-mentioned method (12).

The internal structure of the architecture was composed of convolutional and average pool layers (12). This was followed by a straightener convolutional layer, two fully connected layers and finally a softmax classifier (12). LeNet includes a 5×5 filter (12). Image sizes vary from 32×32×1 to 28×28×6 (12). AlexNet consisted of ﬁve convolutional, three pooling and three fully connected layers (12). The convolutional layer was based on the process of circulating a ﬁlter over the entire image (12). Filters can be different sizes, such as 3×3, 5×5 and 11×11 (12).

In this experiment, ADAM and RMSProp optimization methods were used for LeNet architecture. In AlexNet and VGG-16 architectures, the SGD method was used (12).

Analysis of the increase in model performance (12)

The main reason the minimum redundancy, maximum relevance feature selection method with CNN performed better than the methods described in the three other papers, is the use of additional techniques such as image augmentation, principal component analysis (PCA), mRMR and appropriate feature selection (12).

In this method, during the last couple of iterations, the dimensions of the feature set obtained using image augmentation techniques were reduced using PCA before the classification task (12). The KNN classifier was then fed with the reduced feature set, resulting in an accuracy of 97.92% (12). Then, the KNN classifier was fed using the mRMR algorithm with the 1,000 features obtained from the fc8 layer of AlexNet architecture; 33, 50, 100, 150 and 200 of the most efficient features were determined and ranked, respectively (12). The extracted features were reclassified with KNN (12). A 10-fold cross-validation method was used for testing (12).

PCA decreases the classification accuracy from 98.74% to 97.92% (12). The PCA method obtained this level of success with only 33 features and consumed less time when training the model, due to the use of fewer features. In addition, the performance results of the KNN with and without PCA method were close (12).

After this point, the experiment was extended by focusing on the KNN classifier. In this scope, the k value corresponding to the number of the nearest neighbors was searched in the range of 100 and 102 considering various distance functions by using the Bayesian optimization method (12). Notably, the classification success decreased relatively and gradually as the k value increased (12). The most efficient results were ensured for KNN when the k was set to 1 and the distance function was adjusted to Correlation. In this experiment, the 10-fold cross-validation was also used for evaluation (12). The model achieved an accuracy of 99.51%, sensitivity of 99.32%, specificity of 99.71% and F-score of 99.51% (12).

In a different research team model comparison da Silva et al. 2018 (13), their convolutional neural network based particle swarm optimization (PSO) for lung nodule by achieved an a lower accuracy of 97.62% in comparison to the described Toğaçar et al. 2020 (12). model, mainly because no image augmentation and feature selection technique was used before the CNN architecture, whereas Toğaçar et al. 2020 (12) used the mRMR technique to achieve a model accuracy of 99.51% (12).

Lastly, a comparison of the final research group Lyu et al. 2018 (15) their multi-level CNN classification of lung nodules had a lower model performance accuracy of 84.41% mainly because no image augmentation nor feature selection method was used in their CNN architecture than compared the mRMR used by Toğaçar et al. 2020 (12).

Numerous studies assessing the performance of radiologists in lung nodule detection show low inter-observer agreement, varying sensitivities ranging from 30–97%, and false positive counts of 0.6–2.1 per patient, depending on the input data, method and criteria for identification (16). A study from the NLST, assessed CAD retrospectively in 134 subjects and found an improved inter-observer agreement (kappa increase from 0.53–0.66): results confirmed by similar studies (16). As well as reducing inter-observer variation, one of the greatest advantages of CAD remains the detection of smaller lung nodules that are easily missed by radiologists/physicians (11). The use of CAD by 2 radiologists in an emergency clinic study, did find improved reading time when CAD was used (Radiologist 1: 94.6 vs. 102.7 s, P>0.05; Radiologist 2: 61.1 vs. 76.5 s, P<0.05). Although this decrease in reading time was not statistically significant for both radiologists, they did get a significantly improved rate of nodule detection: 34% and 27% for Radiologists 1 and 2 respectively when CAD was reviewed after the CT images, but not when it was reviewed before the scans (10).

An observer performance study compared the performances of 10 radiologists without and with the use of CAD, in 50 CT examination cases (5). Alternative free-response ROC curves for each output (with and without CAD) were calculated by plotting the true-positive fraction against the likelihood of obtaining an image with false-positive findings (i.e. with one or more false-positive lesions) at each confidence level. Using the area under each alternative free-response ROC curve (Az) to compare the observers’ performances, they found that the performance of all observers was significantly improved with the use of CAD (see Table 1). 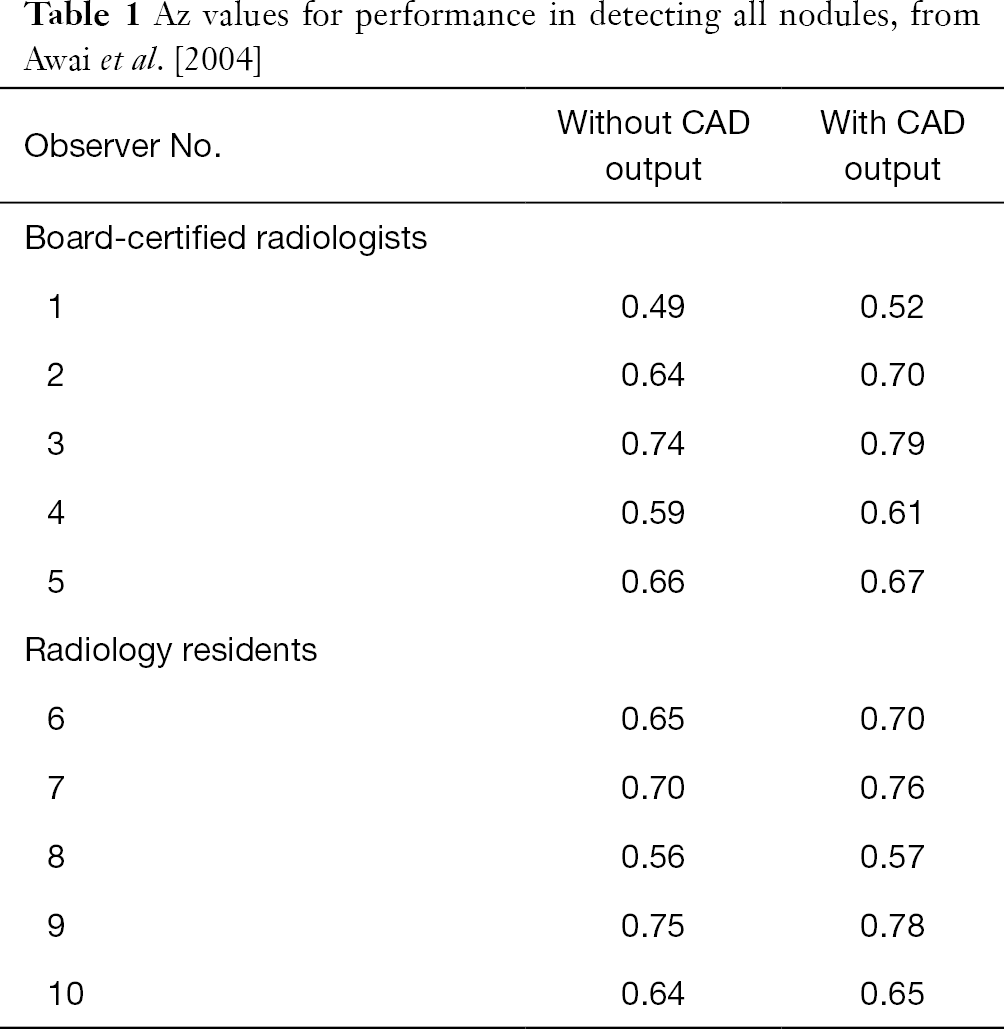 Routine used of CAD by radiologists and physicians, especially in high-pressure environments, is justified due to improved rates of lung nodule detection, inter-observer agreement, interpretation speed, higher true-positive to false-positive ratios and for detection of small (<5 mm) nodules.

The experiment conducted here performs well (see Table 2), but it uses a very small dataset thus, may not perform well on a large production scale. Ideally, the models should be tested on a larger dataset to ensure they work on large, real production data. Also, the image augmentation method was used here to increase the number of images: these techniques may create very correlated images which can lead to overfitting. Another indication of correlation might be the KNN algorithm, which relies on the nearest neighbor, as it performed best on this dataset. It would be beneficial to further test these models on new dataset, which is relatively large and from a different data source. Also, the test dataset should not undergo image augmentation, but be tested in its original form.

Reporting Checklist: The authors have completed the MDAR reporting checklist. Available at http://dx.doi.org/10.21037/jmai-20-24

Conflicts of Interest: All authors have completed the ICMJE uniform disclosure form (available at http://dx.doi.org/10.21037/jmai-20-24). The authors have no conflicts of interest to declare.

Ethical Statement: The authors are accountable for all aspects of the work in ensuring that questions related to the accuracy or integrity of any part of the work are appropriately investigated and resolved.

Open Access Statement: This is an Open Access article distributed in accordance with the Creative Commons Attribution-NonCommercial-NoDerivs 4.0 International License (CC BY-NC-ND 4.0), which permits the non-commercial replication and distribution of the article with the strict proviso that no changes or edits are made and the original work is properly cited (including links to both the formal publication through the relevant DOI and the license). See: https://creativecommons.org/licenses/by-nc-nd/4.0/.